Glastonbury 2013 was amazing! The weather was perfect, some great acts were playing,  the sun was shining and the best bit of all … gluten free for me! Although there was enough for me to eat I am not rushing to give it 10/10 just yet but I was definitely impressed that there were gluten free options being advertised at several stalls throughout the festival.

At every food area I would explore and see what there was and I found the following with a gluten free option/s: 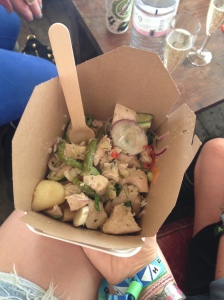 As you can see there was a good mix of cuisines beyond the usual jacket potato or salad so I was happy with the choice. However there are hundreds upon hundreds of food stalls at Glastonbury so trying to find these hidden GF gems proved very difficult at times. In The Park area of the festival I looked round for ages and the only thing I ended up finding was Nachos made from corn with a sour cream and cheese topping – not the best meal but I was starving by this point!

the Pyramid stage had the most choice. The Raclette stand (right) was very good and they advertised outside that they had GF options which was Raclette cheese melted onto boiled potatoes with pickles- yum! Also nearby was the Honeybuns Bakery – the only stall that was entirely gluten free. They had a great selection of GF cakes and treats and the stall itself was decked out with little tables and chairs to enjoy them with a cup of tea.

A big worry of mine was also the fear of cross contamination and the vendors awareness of food allergies. Luckily I did not feel ill during the weekend which was partly the fact I was so careful and also there must have been some level of understanding on contamination issues. When I spoke to the stalls they could

give me information on how the dish was prepared and the ingredients and if they couldn’t they would ask the manager. On a couple of occasions I didn’t feel 100% sure they knew what had gluten in – I was told by one stall the gravy didn’t have flour in but I found this hard to believe so I avoided!

All in all, I would say it was a positive experience. I always had something to eat and there was a good mixture of dishes but they can definitely improve for next year and have more vendors exclusively catering for food allergies or even have more stalls carrying the official GF Logo. I’ll make sure I am there in 2014 to find out!

You can hear my radio interview talking about my gluten free Glastonbury experience on episode 9 of the GFree Radio Show : http://www.spreaker.com/user/5883461 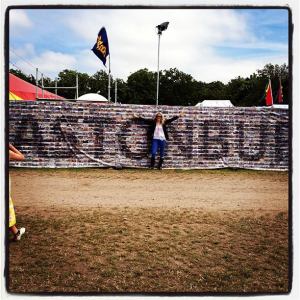 One thought on “My gluten free Glastonbury experience!”

Hi im Jane and im a foodie and gluten free blogger who loves London life, eating in and eating out and lots of cuppa teas!